You are here: Home / Blog / Farewell to Leonard Nimoy – Live On and Prosper LLAP 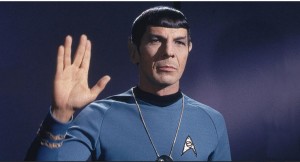 ‘Thank you for making us all feel we belong’

From the LA Times: “In Los Angeles today, Mary Czerwinkski said she was a big Nimoy fan because Spock  helped her feel like “it was OK to be a weirdo” while she was growing up as a pink-haired punk rocker in Chicago.

“He has been a lifelong inspiration,” Czerwinski, 33, said as she left a single rose and a handwritten note on the star at the corner of Hollywood Boulevard and Cherokee Avenue.

The note read: ‘Thank you for making us all feel we belong. Go boldly, Mr. Spock. Your legacy lives on forever. LLAP.’

Since Spock was half alien, the Hollywood resident said, ‘he showed it was OK to be different and that you will still find family and friendship in the world.’ ”

Leonard Nimoy won three Emmy nominations for his Star Trek role. Today Spock’s V-shaped Vulcan hand salute, accompanied by the benediction, “Live long and prosper,” is recognized around the world.  Although Star Trek may have rocketed Leonard Nimoy’s career to stardom and made him a pop culture icon – he was a versatile individual with many varied interests and talents.

Star Trek Almost Phased Out Before it Started 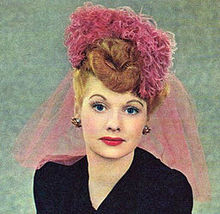 The original Star Trek pilot was rejected by two major TV networks. NBC said is was ‘too cerebral’ to ever be successful on TV. 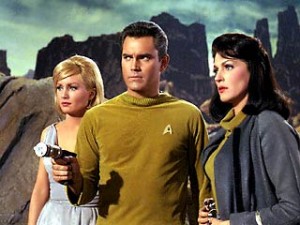 Star Trek barely made it to TV – and was given a chance only through intervention by Lucille Ball. See ‘How Lucille Ball Saved Star Trek‘.

Desilu Productions, owned by Lucille Ball, also produced Mission Impossible and other hit series of the 60’s. As a result, Lucille Ball had considerable network clout. She insisted that Star Trek be given a chance. The series was immediately popular, gaining a devoted fan base. However, NBC considered the show was not worth continuing; and after three years, the original Star Trek was cancelled.

The Origin of the ‘Live Long and Prosper’ Vulcan Salute

In this short video interview, Leonard Nimoy explains where he found the inspiration for the iconic ‘Live Long and Prosper’ Vulcan salute.

Spoiler: It was a spirit-based blessing.

“Don’t grieve for me, Captain! It’s illogical. The needs of the many outweigh the needs of the few; or the one…I have been – and always shall be – your friend.”


“Of all the souls I have encountered in my travels – his was the most human.”

Farewell Spock – Live On and Prosper!

If Not for Lucille Ball - Star Trek Would Not … END_OF_DOCUMENT_TOKEN_TO_BE_REPLACED