You are here: Home / Dorian Karthauser / On The Turning Away – Pink Floyd

On The Turning Away – Band: Pink Floyd 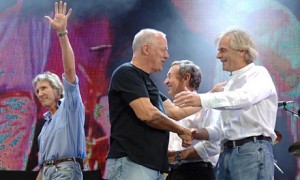 Pink Floyd has a well-established reputation are as an ‘alternative’ or even ‘stoner’ band. The fact that new generations as as enchanted by Pink Floyd music and lyrics as the original listeners  – speaks to the timelessness of Pink Floyd. The many Pink Floyd Tribute Bands touring today demonstrate the on-going popularity of Pink Floyd.


Dark Side of the Moon (1973) remained on the Billboard chart for a record 15 years, becoming the fourth best-selling record of all time. 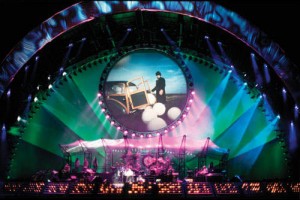 Pink Floyd was one of the first bands to use laser light shows combined with video during concerts. Without question, Pink Floyd perfected the art of using lasers and videos  to ‘involve’ the audience in multi-sensory experience. Their use of technology in a live concert was so radically different from any other rock band in their era (or even in 2014) – Pink Floyd has always been difficult to label and describe. Those who settle for describing the band as ‘a bunch of whacked-out stoners’ totally miss the point of their music – and genius.

All the Pink Floyd band members had some form of advanced education; David Gilmour studied at Cambridge. To a certain extent, Pink Floyd has a definite intellectual appeal. Definitely not your typical rock band.

Pink Floyd’s musical styling was also a major factor in the evolution of New Age and ambient music genres.

From Wikipedia:
David Gilmour has been associated with various charity organisations. In May 2003, Gilmour sold his house in Little Venice to the ninth Earl Spencer and donated the proceeds worth £3.6 million to Crisis to help fund a housing project for the homeless. He has been named a vice president of the organisation.[75] Other charities to which Gilmour has lent support include Oxfam, the European Union Mental Health and Illness Association, Greenpeace, Amnesty International,[23] The Lung Foundation, Nordoff-Robbins Music Therapy,[23] Teenage Cancer Trust, and People for the Ethical Treatment of Animals (PETA).[76]He also donated £25,000 to the Save the Rhino foundation in exchange for Douglas Adams‘s name suggestion for the album that became The Division Bell.[30]

Lyrics: On the Turning Away by Pink Floyd

If Not for Lucille Ball - Star Trek Would Not … END_OF_DOCUMENT_TOKEN_TO_BE_REPLACED